Buried in the Basement

They say if you wish to make God laugh, all you have to do is devise a plan.  I announced in my last post that Buried in the Basement, my new short story collection, would be available on Friday and that was apparently all I needed to ensure a very busy and distracting week.  But have no fear!  I had to spend the entire day today working, but I remain on schedule!

Buried in the Basement should be available at Smashwords, Amazon and Barnes & Noble in a matter of hours.  It’s difficult to predict exactly when the files will be ready for sale at Amazon and Barnes & Noble, since the review process can take up to 72 hours.  I have already uploaded the manuscripts to both of those sites and with any luck they will be ready by morning.  Smashwords, by comparison, is usually much faster, requiring only minutes when at its best, but occasionally it does get backlogged.  I’ll be uploading it there later tonight.  With luck, it’ll actually be available for sale before many of you go to bed.

In the meantime, I’d like to formally pull back the curtain and introduce my new book… 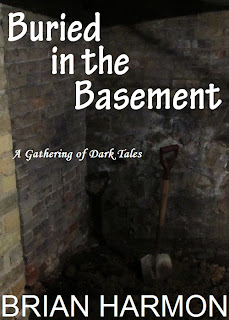 Buried in the Basement

“A creepy collection of six short horror tales by the author of The Temple of the Blind series.

A nice guy finishes last one last time.  Robbed of everything he ever loved, Daniel sets out to confront the bringer of flames and put an end to his suffering one way or another.  Allan is amused by the prospect of a ghost taking up residence in his modest home…until something begins to take an interest in him as well.  A night of illicit passion quickly turns hellish for Roger and his wife’s best friend.  Kyle and Cat find themselves all alone in the dark with no memory of how they arrived there…and something unnatural is lurking in the unseen walls around them.  After surviving a bizarre fall from a second story window, Jeremy’s life begins to unravel around him as he finds himself and his new friends, Violet and Corey, running for their lives from a strange, black creature.

If you’re a fan of scary stories, you won’t want to miss this collection of tales unearthed from the darkest and most chilling corners of the basement.”

This collection is approximately 44,000 words long and includes the following short stories:

Excited?  I know I am!  Let’s all try our best to sleep tonight and then have a great release day tomorrow!